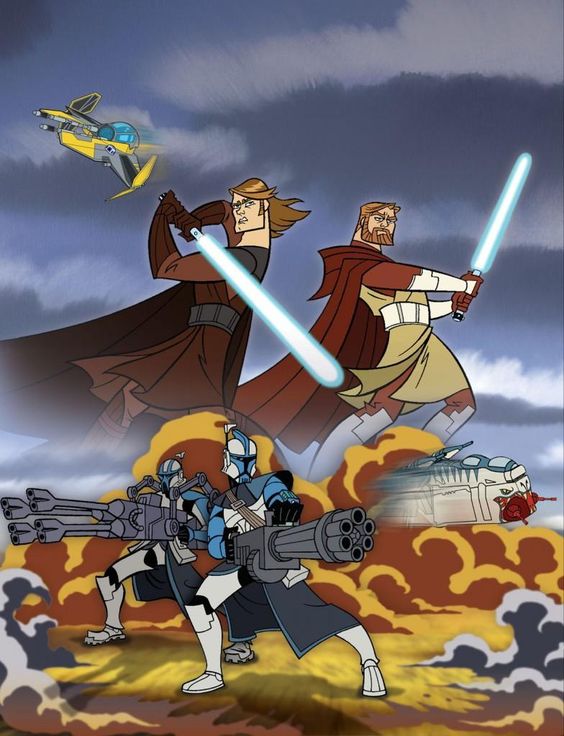 Disney+ has added a few “Vintage” Star Wars content recently, including the Ewok movies “Caravan of Courage” and “The Battle for Endor,” something called “The Story of the Faithful Wookiee” and an Ewok cartoon. I’m not particularly interested in any of that.

What I am interested in is the “Genndy Tartakovsky” Clone Wars animated series that ran on Cartoon Network in 2003. Back then, it was just a cartoon that I didn’t care about, for kids, a spin-off of the prequels that I didn’t like. I wasn’t a kid, didn’t have a kid, and had no use for Cartoon network, lol.

Now, of course, my eyes have been opened to the wonderful, imperfect prequels, and I adore Dave Filoni’s Clone Wars. How could my curiosity not have been aroused? So I watched it (the original 15-minute shows are grouped into two hour-long “volumes.”)

At first, it seemed so alien to me, I didn’t think I was going to like it. There was very little dialogue, a whole LOT of battles, explosions, and shoot-em ups, and I thought, yeah, 8-10 year-old boys (or girls) would eat this stuff up, lol. Even the Clones didn’t speak too much; they communicated through hand signals, which was actually pretty cool.

In the first volume, we see how Dooku and Ventress meet, and how Anakin pursued Ventress, battled her, and defeated her. Mace Windu goes up against some battle droids, and just seems like Superman he’s so amazing. Kit Fisto does some battle underwater, while Obi-Wan leads the Clones in battle in an unnamed city (perhaps Christophsis?). Typically, I felt there wasn’t enough Obi-Wan. There can never be enough Obi-Wan, lol. Towards the end of Volume One we meet General Grievous, who goes up against Ki-Adi-Mundi and other Jedi.

In Volume Two, there are still a lot of battles, but much more dialogue and actual storytelling. Yoda and Padme go to the rescue of Luminara and Bariss Offee, who have done battle with droids in the Illum Temple and become trapped. Eventually, the whole things coalesces into an over-arching story arc that is reminiscent of the plot of the book Labyrinth of Evil (which, published in 2005, probably took its cue from this series). Grievous is sent to attack Coruscant and kidnap Chancellor Palpatine, while Shak-Ti and two other Jedi are tasked with protecting him and getting him to a bunker deep within the city. Anakin and Obi-Wan, meanwhile, are sent to a planet to help the natives get their warriors back from the Separatists, who are transforming them into gruesome monsters (I’m not sure why? But I’m glad this little side-plot didn’t make it into the novel Labyrinth of Evil, lol). It was supposed to be a final test for Anakin, since he didn’t take the Jedi Trials in the usual way. The events of Volume Two lead right up to the beginning of Revenge of the Sith.

In the end, I did enjoy this version of Clone Wars. I like the Manga-inspired animation, and there’s some humor in there, too. The Genndy Tartakovsky Clone Wars is just a lot of fun.

Did you watch this series back in the day? What did you think of it? If you’re watching it for the first time, what’s your opinion? Let me know in the comments, and we’ll talk about it!

Exploring every corner of the Star Wars universe.

Musings of a Middle-Aged Geek

... observations from a lifetime of geekiness.

Another Book, Another Destiny...

a writers blog, and other things

The Prattling Writer
Musings of a Geekzer

Thinking and nerding since 1972

Your source for everything Obi-Wan Kenobi. This is the companion blog to the @AllThingsKenobi Twitter. Because our love doesn't always fit into 280 characters.

Do or do not, There is no try.

A community for fans of all types of media, movies, games, etc. Written by Fanatics for Fanatics